Six months on from the London Paralympic games, a number of youngsters from Richmond took part in the inaugural Balfour Beatty London Youth Games Inclusive Zone Basketball (IZB) tournament. The ground breaking competition was held at the Sportsdock Arena at the University of East London on Tuesda 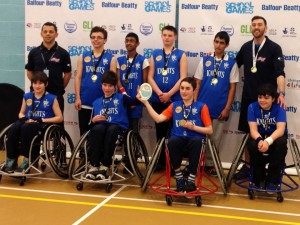 Run in association with England Basketball, IZB is a 4 a-side game, developed to enable players who cannot participate in a full game of basketball to enjoy playing the game. The zones used enable players to be matched in their abilities within these zones.

The middle zone is for two players on each side using wheelchairs while the outside zones on either side is for non-wheelchair competitors. Richmond were strong from the start with good wins against Haringey and Redbridge in their opening matches by five and four points respectively.

However they could not be separated from Southwark in their final group match and were tied 6-6 at the end of an absorbing encounter.

In the semi-finals Southwark were too strong for Haringey and reached the final with a 4-0 win while Richmond continued their good form with a big 6-0 victory over Redbridge.

The final was a very tight affair as again Southwark and Richmond could not be separated. It came to down a single point in the last minute by Richmond to seal victory and give them the inaugural Balfour Beatty London Youth Games IZB title.

Speaking after the final Richmond’s team manager James Merchant was very happy with the performance of his whole squad. He said:

“The main thing for me today was playing as a team, every player on the squad contributed, we didn’t rely on one or two players. Everyone did their bit so I’m very proud, very happy.”

He also praised the work of those within Richmond in developing wheelchair basketball as a sport.

He also echoed the sentiments of other team managers in saying that these events are key in increasing participation in disability sport.

“It’s the foundation of sport and the success we saw in the summer in the Olympics and the Paralympics. You get children playing early, you get them to realise what they can do, not looking at what they can’t do and you get to see them begin to realise their potential a lot earlier on.”

The 2013 London Youth Games will be the biggest in history featuring 85 competitions across 33 sports and 27 event days, culminating in finals week at the National Sports Centre Crystal Palace in July where the overall winning borough are awarded the Jubilee Trophy.

KNIGHTS LAUNCH ‘BOUNCE BACK TO BASKETBALL’

Despite it being a very different half-term to usual, Knights remain committed to providing fun basketball experiences to our young players so are very excited to be delivering daily sessions direct to your home! FURTHER Read more…