Over the May bank holiday weekend, four Knights teams and a considerable cohort of supporters made the trip from Richmond to the National Basketball Performance Centre in Manchester for the Basketball England Junior Final Fours – where the best remaining teams in the country compete to be crowned champions of England.

On Saturday 30th May the semi-finals commenced with the Under-16 Girls, who went undefeated in the South I Division and won the WCBL league, sweeping aside National Cup winners GCA Haringey Angels 65-41 behind 17pts and 5 steals from Amba Thompson and double-doubles from England internationals Ester Kursite and Katie Cox. Leading by as much as 32, Coach Isaac Omirin and Assistant Coach Phil Sheldon were able to rotate players to ensure they all got to experience playing in front of an electric atmosphere generated by hundreds of basketball fans.

Meanwhile, on court 3 of the NBPC, the Under-14 Boys had a semi-final against London rivals Baltic Stars. Christ’s School student Aydan Moloney put in a defensive shift against the Stars most potent shooter, limiting him to just 9 points. This allowed the offensive duo of Tejan Rugette and Milo Murray – also Christ’s School students – to build an insurmountable lead by combining for 57pts to lead Knights to their first ever u14 boys National Final.

Following up the early Saturday morning games were the Under-16 Boys who faced a strong and physical London Legends team. The Premier Division champions could not get their usual potent offence going, despite 24pts from Tejan Rugette and 11pts off the bench from Gonzalo Rodriguez, and fell to a 65-76 defeat.

The last game of the day for Knights was the Under-14 Girls against Leicester Riders. The Knights’ trio of Neve Rugette (17 points), Bade Isik (13 points) and Precious Godwin (16 points) led the London team to a 42-27 half-time lead. However, Leicester dug deep to bring the score back to within two points to make for an exciting and nerve-wracking final two minutes. However, the Knights girls held their nerve and were met with jubilant celebrations at the final whistle from the travelling supporters.

The results meant that on Sunday 1st May every Knights team was matched up against a team from Manchester, with three out of the four teams competing in the National Final for their respective age groups following a league season and playoffs involving hundreds of clubs across the country. The fans from south-west London came prepared with drums, horns and bells to counter the numbers of the home-crowd and cheer on their young Knights.

The first final of ‘Super Sunday’ had the Under-16 Girls match up against northern powerhouse Manchester Mystics, the only club with more teams at the Final Fours than Knights. Knights could not replicate the fluency of their semi-final performance and trailed by as much as 13pts in the first half. Unfazed, the girls rallied behind three-pointers from Amba Thompson and Katie Cox to tie the game 35-35 in the third quarter and raise the roof of the NBPC. Manchester, however, showed their class in pressure situations and pushed ahead in the fourth quarter to take the National title.

Coach Isaac had to rush straight to court 2 for the under-16 boys third-place playoff, where Knights put on one of the club performances of the weekend, much to the delight of their fans watching courtside and via social media. England-duo Harry Godwin (29pts, 3stl) and Ethan Conway (25pts, 11reb) were the standout players, but the entire team contributed to secure an impressive 3rd-place in the country for the Richmond team.

Coach Isaac, who has led Knights teams to more league titles and Final Fours than any other coach as well as overseeing the development of every Knights player at the event, said: “It’s an amazing achievement for the u16 girls and boys to come second and third in the country. It was a hard season to manage but we made it all the way to the Final Fours and are more than happy with our achievement!” Most of Coach Isaac’s players are now graduating from Knights to attend some of the most prestigious basketball academies in the country.

The travelling supporters poured into court 3 of the National Basketball Performance Centre for the Under-14 Boys Final against another Manchester Magic team. The away team flew out to an 18-9 lead in the first quarter as Knights controlled the tempo under the leadership of Dante Patel (8reb/7stl). The Magic, who overcame a 20-point deficit in their semi-final, kept themselves in the game with impressive outside shooting, and brought the game back to 39-39 halfway through the third which set the stage for a nail-biting finish in the race to be crowned champions of England. In the highest-pressure game of their young careers, all the Knights players displayed tremendous team-spirit to encourage each other as the atmosphere intensified, especially as Milo Murray, who scored 31pts across the weekend, was carried off with a knee injury. With the game in the balance, finals MVP Tejan Rugette stepped up to cement his place as the best U14 player in the country as he scored 12 points – including two clutch three-pointers – in the fourth quarter. The Knights defense held firm and the boys triumphed 68-60 to win Richmond Knights first ever national championship.

Head Coach Gennaro Augenti was humble in his accomplishment: “As a first season as Head Coach in the UK, I wasn’t expecting to win a gold medal, but I knew I had a special group! It takes a team to accomplish big things and I wasn’t going to do it without the support of the entire Richmond Knights organisation. Thank you for trusting me throughout the season!”

The last game of the day was left to the youngest Knights team. The u14 girls consist mostly of year 8 players who are competing against teams a year older. Despite the age-difference and fatigue from the weekend’s excitement, Coach Chanel Mubeen’s team got within single-figures of the Manchester Mystics on numerous occasions, much to the Richmond fans’ delight. The local team were able to see the game out and eventually won 90-75. Neve Rugette followed in her brothers’ footsteps by top-scoring for Knights with 25 points, including three 3-pointers. Bade Isik and Precious Godwin scored 16 and 15 respectively, while Ada Akyol was fearless in coming off the bench to contribute 8 points and 3 assists. The girls’ head coach, Chanel Mubeen was full of praise for her young team, saying “I’m so proud of the girls for coming second in the country and for making it through the season! We will keep working hard as it’s all about the kids and the programme to experience these opportunities.”

Founder and Director James Merchant gave tribute to the teamwork involved in the achievement: “While we are not in it for the medals, it is nice to receive affirmation for over a decade of incredible work from players, staff, volunteers, and supporters. This weekend has been a true celebration of our club and everyone who makes it so special.” He went on to say, “Every Knights player is leaving Manchester with a medal which is testament to their commitment, especially throughout the pandemic and in their return to the court.”

Knights Basketball was founded in 2009 and only entered teams into the National League in 2013. In less than ten years they have achieved momentous success both within their local community – by delivering school and club sessions to thousands of young players – and on a regional and national level by winning 16 national league titles, qualifying 9 teams for national final fours, having 20+ players selected for England and GB teams, and supporting numerous schools to London, Surrey and National titles.

For further information on Knights and how to get involved in basketball, please email office@knightsbasketball.co.uk 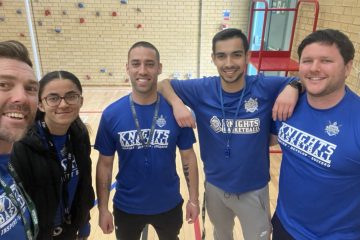 Knights offers basketball and sports development enthusiasts the opportunity to build a career doing something they love! Why work at Knights?  An established community club that consistently achieves success on the court, including regular local Read more… 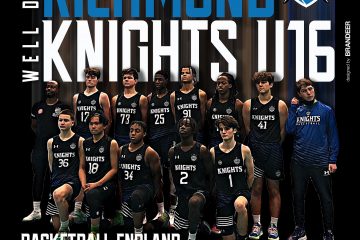 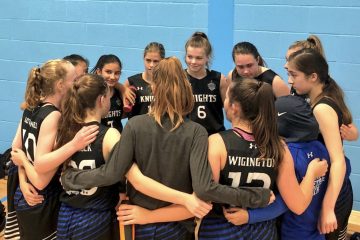